When you’re deciding on a financial advisor to guide you on decisions regarding retirement, investments, life insurance, estate planning and the like, you should have a lot of questions prepared. One of the most important questions to ask is whether the advisor is a fiduciary. You might assume that a financial advisor always has the best interests of the client at heart. That, unfortunately, is not always true, and it is at the heart of the fiduciary rule.

What is a Fiduciary?

When a person or organization acts as a fiduciary, they are ethically bound to act in the best interests of the party whose assets they are managing. Such assets are managed to benefit their owner, not for the profit of the manager. There should also be no conflict of interest between the fiduciary and the owner of the managed assets. Fee-based investment advisors are regulated either by the state or the Securities and Exchange Commission (SEC). A fiduciary has the duty of “loyalty and care,” which is another way of stating that the client’s interests are always put above their own.

Broker-dealers, on the other hand, operate differently. They are sales representatives, and while they must make “suitable” recommendations to clients, their primary loyalty is to the brokerage for which they work, not necessarily the client. They are also paid by commission, rather than the flat fee charged by fiduciaries. While there are plenty of honest broker-dealers in the business, there are also those who will steer clients toward high commission offerings rather than those charging a low or no commission. For example, a broker-dealer could sell a client a load mutual fund, which charges a commission, while a similar no-load mutual fund may have an even better track record. An advisor acting as a fiduciary cannot do that. The Council of Economic Advisors estimated $17 billion annually is lost by investors overpaying for such investment products.

What is the Fiduciary Rule?

A fiduciary rule regarding full transparency has long been a practice of many financial planners and advisors, and in 2015 the Obama administration wanted to initiate investor reform via such a regulation. As proposed, the fiduciary rule would require all financial firms to act as fiduciaries when dealing with clients’ retirement accounts. Firms that failed to so could face class-action lawsuits.

The U.S. Department of Labor (DOL) was supposed to begin phasing in the rule as of April 2017, but the Trump administration had issued a memorandum in February 2017 which delayed the rule’s implementation by six months. In June 2018, the U.S. Fifth Circuit Court of Appeals upheld an earlier decision to strike down the DOL’s fiduciary rule. The court’s majority found that the DOL exceeded its authority when promulgating the rule.

While the fiduciary rule is dead on the federal level for now, that does not mean it isn’t vitally important for consumers. You do not want to settle for less when searching for a financial advisor.

Many people think their financial advisors are fiduciaries, but that’s often not the case. As noted, some financial advisors are essentially salespeople, not fiduciaries, and are more interested in selling a product than necessarily looking out for the client’s best interest. It’s one thing if a client understands a particular advisor is basically a salesperson, but if they don’t, the financial planner can take advantage of them. The fiduciary rule would have forced salespeople to act as fiduciaries, and that was not a popular stance among the salespeople posing as advisors.

When interviewing a financial advisor, inquiring whether they are a fiduciary should prove one of the initial questions. If the advisor responds affirmatively, ask them to put it in writing. NAPFA recommends asking potential advisors to sign an oath stating they will always act in your best interest:

Following the NAPFA Fiduciary Oath means I shall:

You should also ask how they are paid since the answer will tell you whether or not they are a fiduciary. In many cases, you are entrusting your life savings to this advisor. You must ensure they are always acting in your best interest.

Beware: any good salesperson will have a smooth answer ready if they aren't a fiduciary - "we always put our clients first," "oh, the company won't let me sign anything," "our legal team would have to look at anything we put in writing." But this is a simple question with a simple answer. A true fiduciary advisor will be able to sign a fiduciary oath, no problem. If they can't sign an oath saying they will put your interests before theirs, you should run, not walk, away, no matter how nice or well-intentioned they seem.

Of course we will, and we will always put your best interest first! Here's our promise: 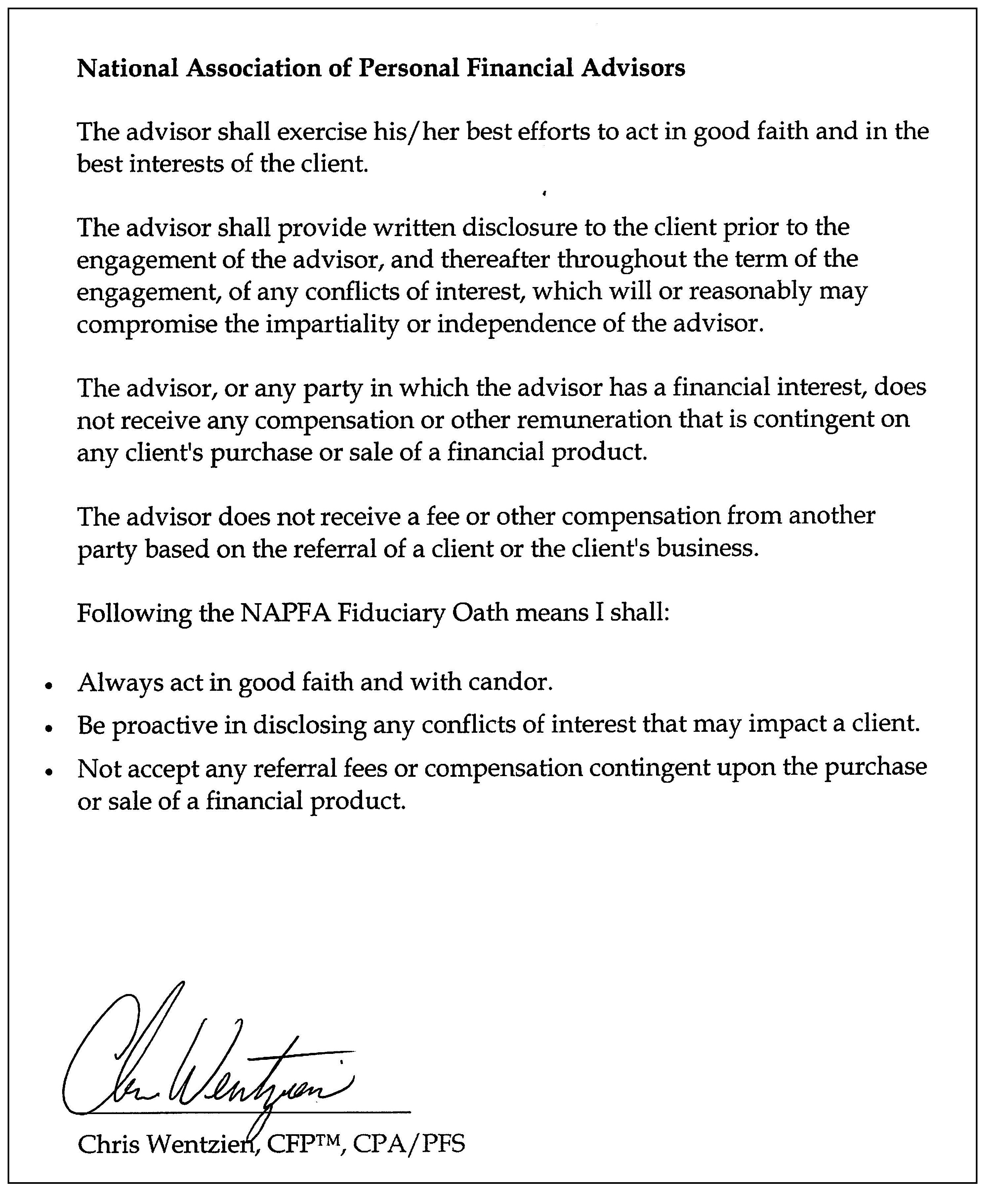 Want to meet a real-life fiduciary? Leave your info here and we'll call you back: